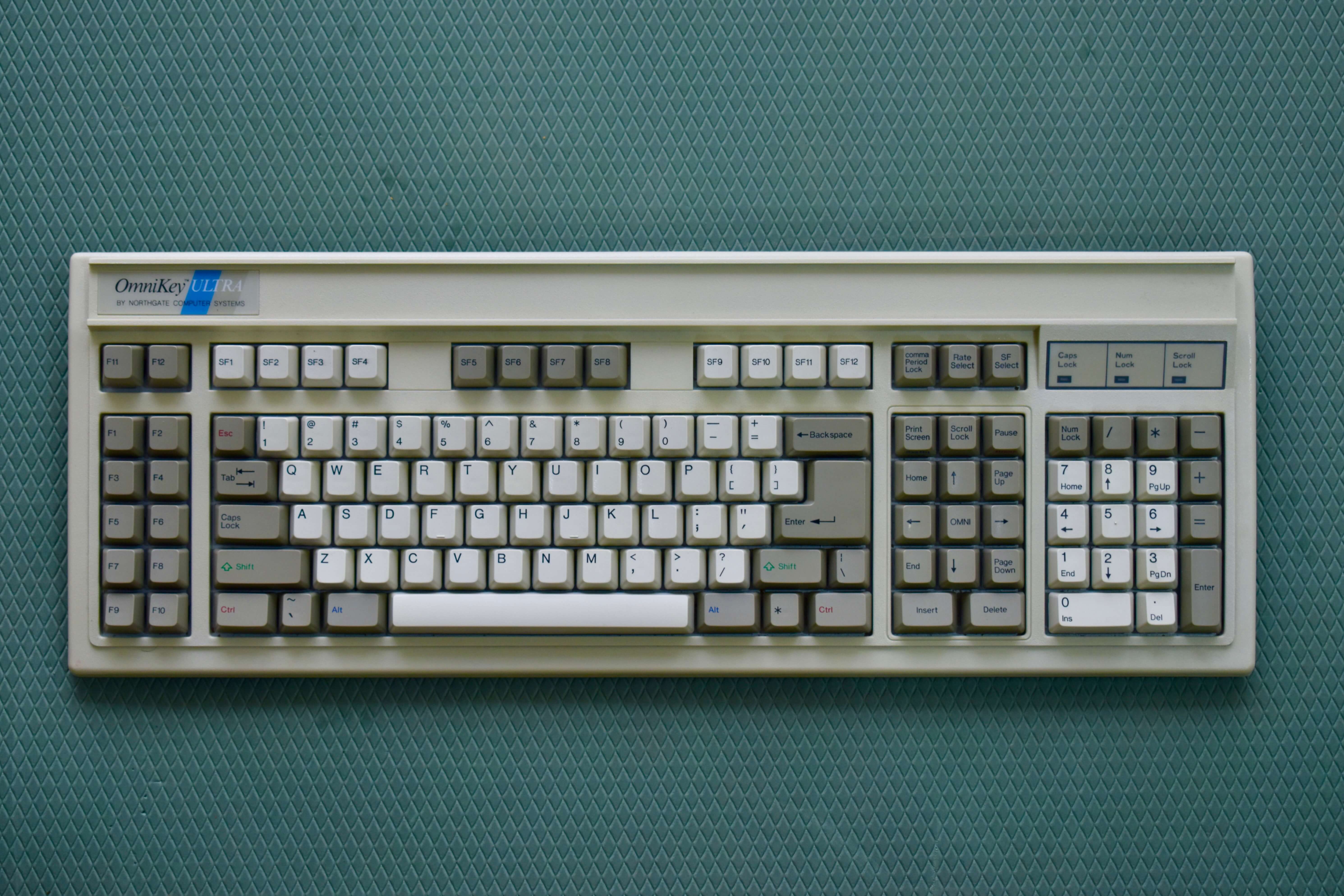 Northgate Computer Systems was founded in 1987, and they used to sell personal computers. They sold their products through direct marketing However, their Omnikey keyboards were sold through dealers. Before the introduction of Omnikey series keyboards, Northgate badged keyboards from several companies such as Focus and Monterey, and some of the initial Omnikey models are said to be manufactured by Focus.

The first generation of Omnikey models was sold in the late ’88s, and the Omnikey Ultra series was manufactured in the mid-’90s. Here are some advertisements for Omnikey Ultra boards. 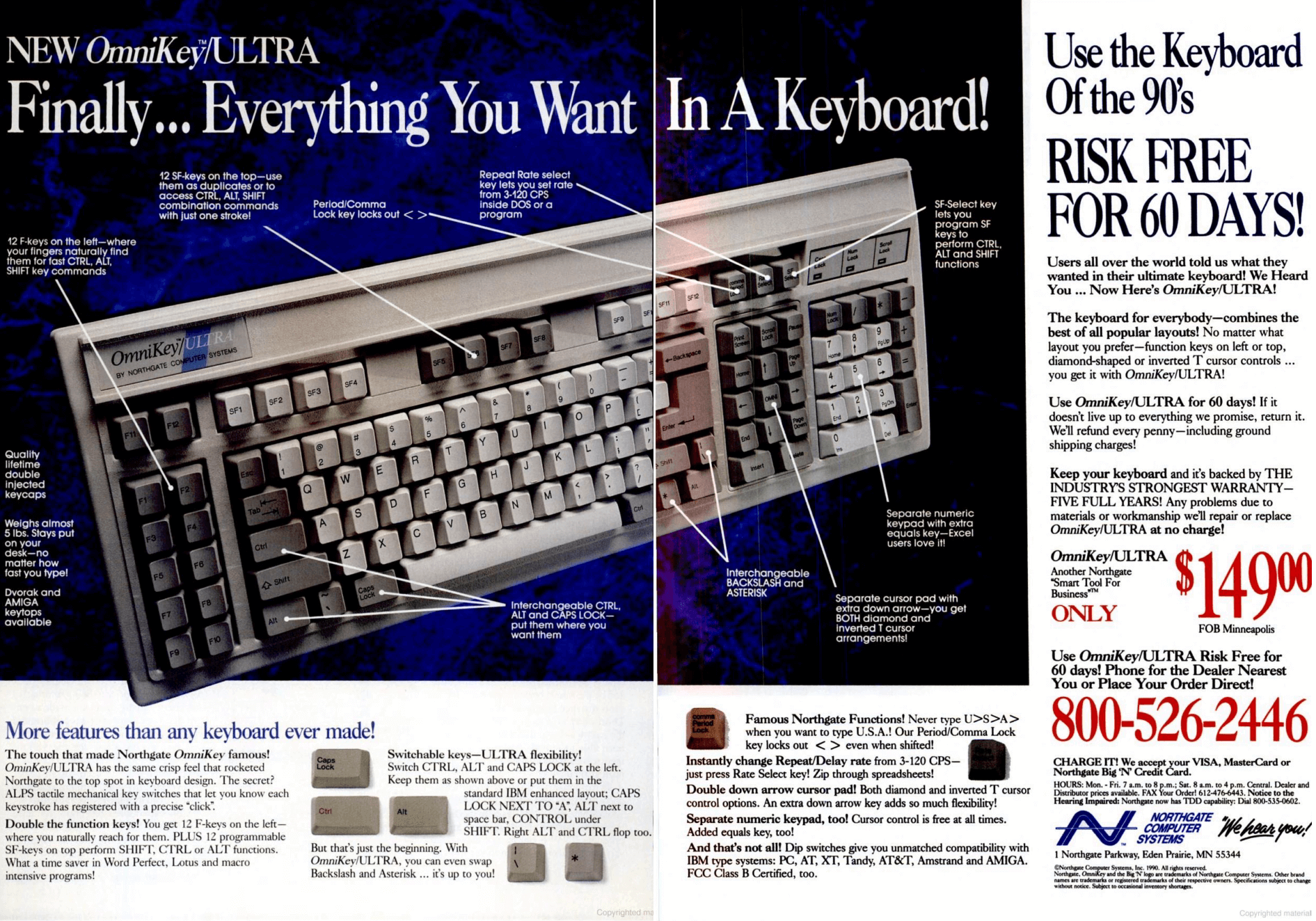 These Omnikey keyboards were widely praised for their reliability and key feel. After they ceased their computer production, they kept on marketing and selling their keyboard until Avant took over. Many users preferred using the Omnikey keyboard instead of the original boards that came with their computer. These boards were compatible with both IBM and Apple computers. 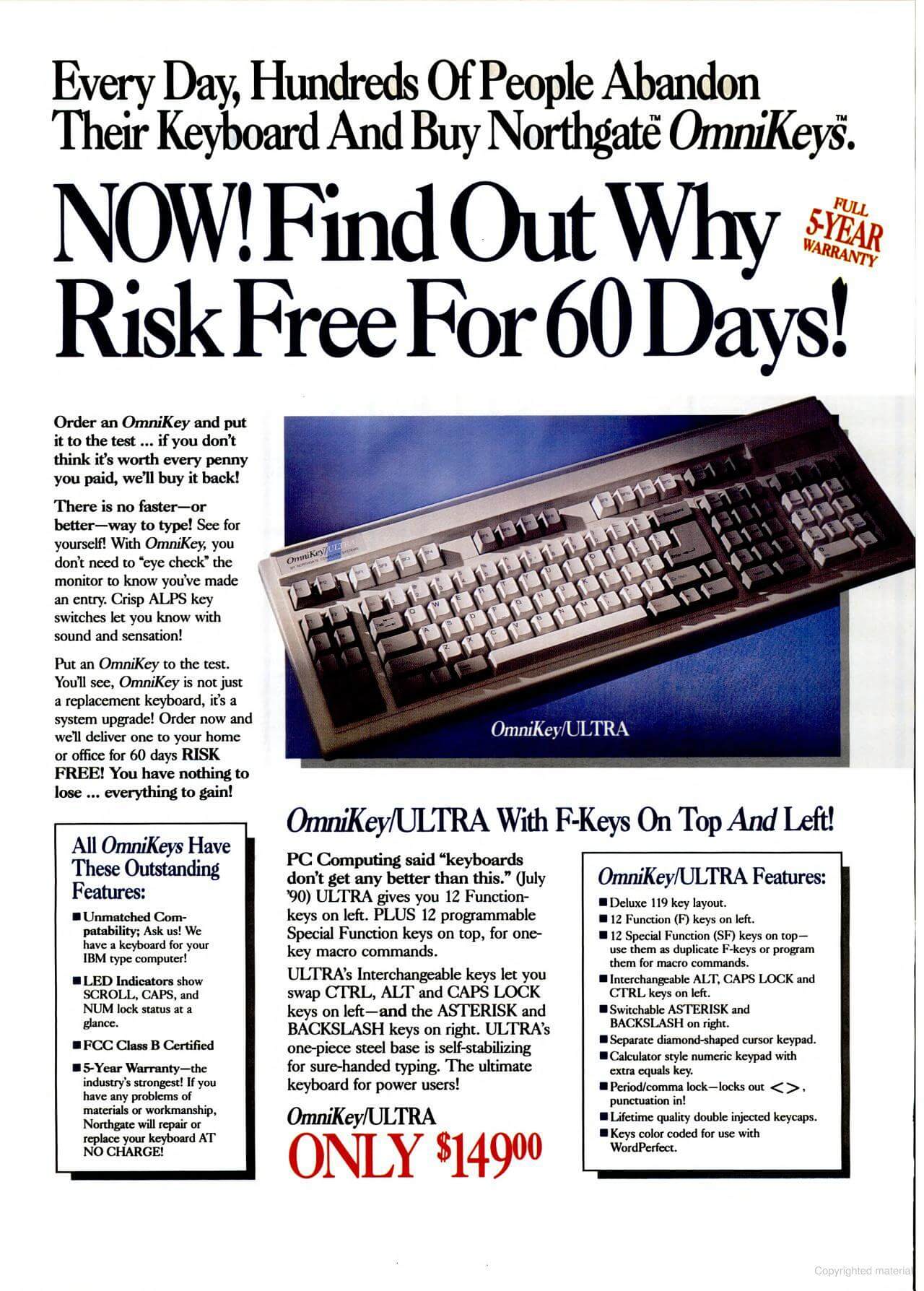 This keyboard uses a hard plastic top, and that’s all the plastic you get on the board(except the switches and caps). It uses a steel switch-plate and a steel back-plate. It weighs around 2.3 kg, which isn’t surprising given so much of metal it has. This board is built like a tank and is one of the toughest Alps boards I own. 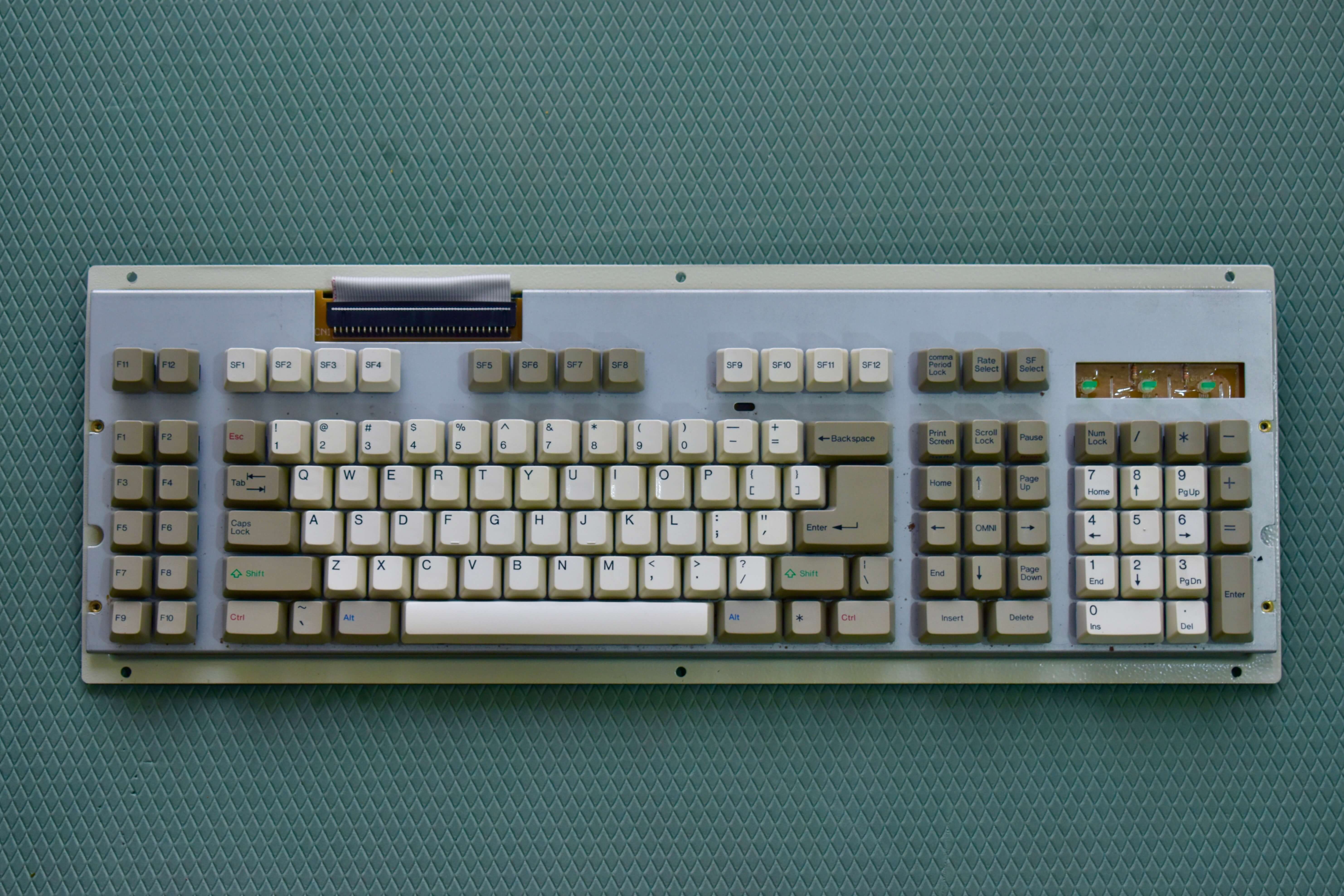 Opening this board is very straightforward; It has 6 screws in the back and 4 more on the switch plate. The back panel is quite heavy and weighs around 800 grams. On the back, there are multiple stickers, One with FCC id, one with the serial number, and there is another sticker with some numbers I couldn’t make any sense of. The feet are rubber coated for better friction, and there are two sturdy rubber pads on the bottom. 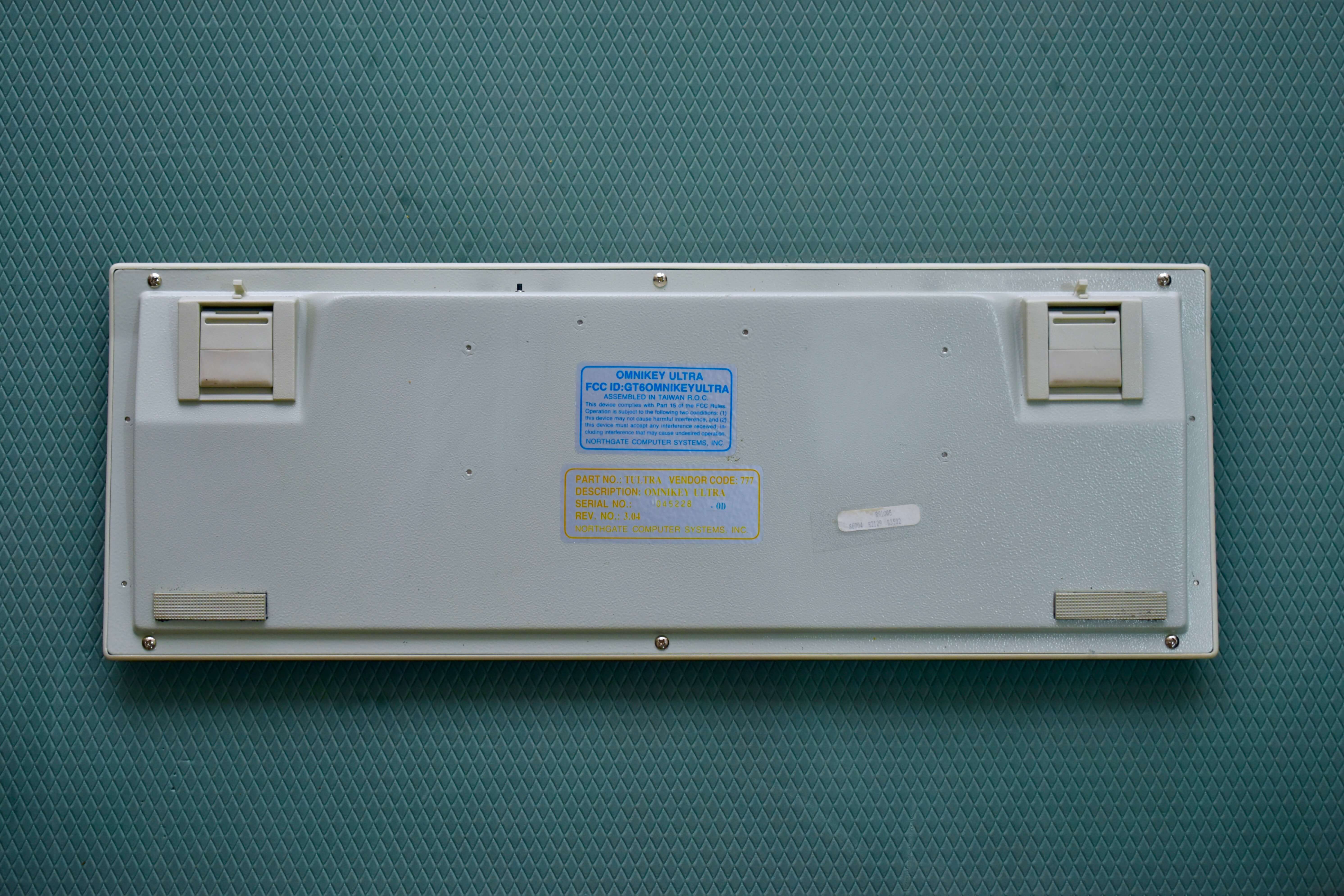 Northgate Omnikey Ultra back side

Like most Omnikeys, this board came with Alps complicated pine white switches (Alps SKCL whites). The caps are Doubleshot ABS ones, and some of the modifier switches have different colors. It features a BAE (Big Ass Enter), left side Function row, and a navigation cluster with cross-arrow keys. The alphas + modifier layout is very similar to the Monterey layout with a Big ass enter and a full-sized backspace.

The PCB is connected to the controller via a white ribbon cable. This PCB supports N-key rollover and various layouts including but not limited to Dvorak, Amiga, and Qwerty. The controller also features a set of DIP(Dual-in-line package) switches, which can be configured to set layouts, swap modifier keys, and change protocols. 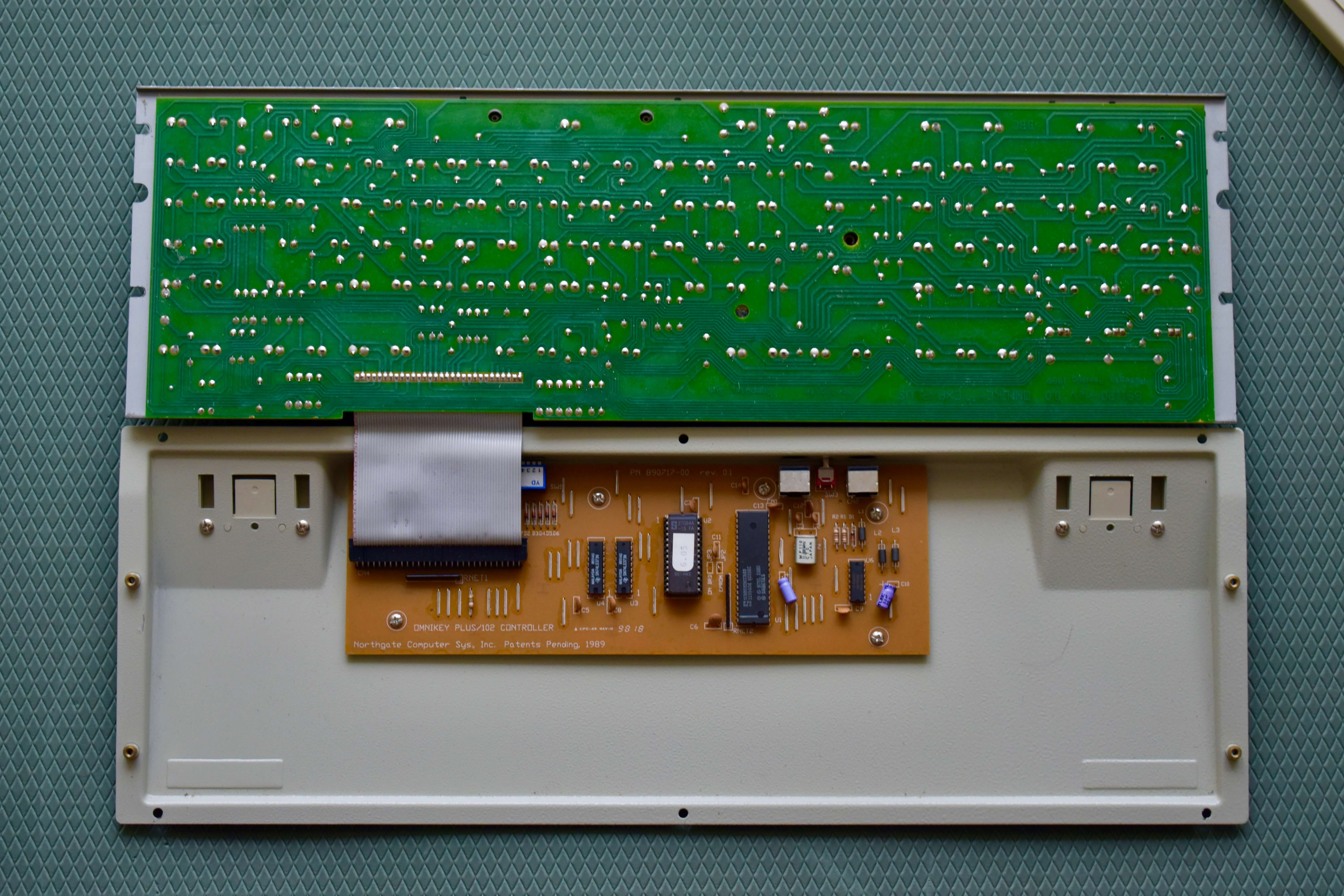 The keyboard wasn’t in a good state when I acquired it. It needed some cleaning and some retr0briting to bring it back to its original condition. I have greased the stabilizers with di-electric grease to reduce the rattle; However, the switches could use some cleaning. This keyboard is by far the most practical vintage keyboard I have ever owned, and I intend to keep using it in the coming years.